“I saw an ad for something called EasyWater …”

One of the most widely advertised “NO-SALT” water treatment devices is called EasyWater. You may have seen it advertised on shows like Glenn Beck, Sean Hannity or Fox News. Or the latest one is called Hyrdocare. But it’s the same story…

The question folks ask is “Does it work?” The short answer is NO.

Laboratory tests at the Penn State University have confirmed what many water professionals have suggested: “No discernible change in water hardness scaling.” 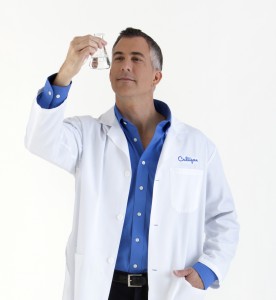 These “No Salt” gadgets are being hustled on TV, online and through plumbing companies.

The implied and often stated message is that you can get the benefits of SOFT WATER without an ion exchange water softener.

This is simply not true.

If you want the benefits of SOFT WATER there is only one reliable option … a water softener. We can make it EASY for you to get SOFT WATER … with a Culligan Water Softener. Culligan is the #1 recognized brand for water softeners and has been for over 75 years.

My name is Delmar Moore and I’m your local Culligan Man. The one thing I always tell people is that Culligan has been an innovator in water treatment since 1937.

Our water engineers have tested over 50 different No-Salt devices to determine what works and what doesn’t.

After all, if there’s a better solution for soft water than our current ion-exchange softener, you better believe we’re going to offer it to you. Unfortunately, there isn’t. Our engineers couldn’t find a single product that produced results worthy of the Culligan name and “Hey Culligan Man” service.

So if magnetic, no-salt, saltless and salt-free conditioners don’t truly give me the benefits of soft water, what are my options?

Your options are pretty simple… For soft water, you NEED an ion exchange water softener. It’s the only thing that is scientifically proven to:

But I’m on a low-sodium diet, I can’t have salt in my water.

That’s fine as you have a few options:

Also, keep in mind that the additional salt in your water is almost negligible. In Southeast Michigan we have around 1-99 grains of hardness on city water supplies (which is a combination of calcium and magnesium). When we exchange that for salt (sodium) you get about 28-35 mg of salt for each 8oz glass of water.

To put that into perspective, 1 tablespoon of ketchup has about 167 mg of salt.

I can’t lift those big, heavy bags of salt!

That’s no problem. Just say, “Hey Culligan Man!” and we’ll take care of it for you. We’ll bring salt right to your front door or even dump it into your softener. Whichever you prefer.

How do I learn more?

The next step is for us to test your water, inspect your plumbing, and determine what size of softener your family would need. Simply fill out the contact form and we’ll get in touch with you right away to schedule a convenient time.

No hassle, No Obligation, No BS. That’s our promise to you and your family.

David Nigh
11:34 24 Oct 21
Couple year's ago Culligan came and replace the existing water softener I had installed 3 years ago. I had problems with the smell and residue it left behind. Culligan came and installed their softener and I no longer have problems. I've called few times with questions. They were answered promptly and resolved.

Susanne Bemis
20:03 23 Oct 21
I find Culligan to be reliable and friendly. Will come when you need something like salt or change filter

Jeanne Luddeni
12:58 23 Oct 21
There a great company. Very fast service and friendly. They will come over no matter what the weather. I think I'll keep them.

*HE is the world's most efficient water softener when configured with proportional up-flow brining and Aqua-SensorTM
EXIT
Free Install
No prize
Next time
Almost!
Free Month BWD
Free Air Quality ✓
12Mths Same as Cash
No luck today
Almost!
$50 off
No prize
Unlucky
Get your chance to win a prize!
Enter your email address and spin the wheel. This is your chance to win amazing discounts!

These offers & discounts apply to new customers and equipment only.

By providing your email above you will receive exclusive: